If you follow my Instagram then you probably have a pretty good idea about how things have been going with Rebel but here is a more detailed rundown.  Fair warning there will be lots of pictures and videos in this post.

We drove down to pick them up from LAX and everything happened so fast I didn’t get many pictures.  They loaded in the trailer like pros and we were off on our 6 hour journey back home.  Most of the way home it was 112 degrees! Welcome to California Czech ponies!  Thankfully it doesn’t get that hot in Gilroy. 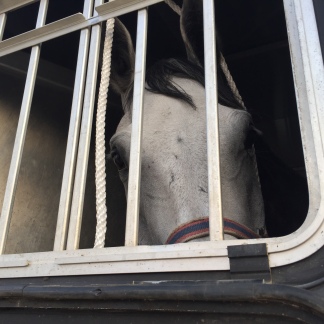 They handled the haul well but were very happy to be out of the trailer.Once in their stalls we needed to wait for them to pee and poop so we could rest easy knowing the drive didn’t stress them out enough to colic.  So about 3 hours later only Rebel was cleared.  Silver straight up refused to go the bathroom with an audience. We tried turning the lights off and leaving him alone awhile but still no luck.  Eventually we decided to give up.  We took the remaining food out of his stall and went home knowing we would be back in a few hours to check on them.  The next morning we check his stall and low and behold we have poop!

The next day was all about pictures, treats, pets and turn outs.

After giving them three days to settle we tack them up for their first ride.  Rebel was amazing!  He acted as if he had been in the arena a million times.  We just casually hacked around and tried some trot poles which he was confused by.  He trotted up to them and then cantered both.   He was like “silly girl jumps are suppose to be cantered”.  After a few attempts he caught on and trotted through them nicely.  We were only going to flat but he was doing so well we threw in a crossrail 🙂 I couldn’t believe how much fun I had just hacking him.

Holy crap this horse is amazing!  I remembered why I fell in love with him in the first place which is because he is super honest and forgiving.  I hadn’t jumped “big” in 2 months so I was really nervous but he took care of me.  I got to some bad spots but he saved me time and time again.   I can’t believe he’s only 5 and will still get better and better.

I have to share this video because we get a bad spot in and you can hear me say “shit” cause I figured we weren’t going to be able to get out smoothly but my horse is so freaking amazing he acted like it was nothing.

Yeah he is only 5 lol.  So we got our first case of baby brain yesterday.  He spent the morning in turn out running around and having fun but I guess that sapped his energy.  It got really windy but we were determined to ride.  He was LAZY!  My legs are still aching from that ride.   One thing I took away from this lesson is just how freaking honest this horse is.  Even though we crawled (like western pleasure speed even though I am pressing and pressing and kissing and kissing) through a four stride he still jumped the jumps.  He was being a brat for sure but he still didn’t think twice about getting to the other side.   Even though he was giving me attitude and getting behind my leg the ENTIRE lesson I still walked away feeling so lucky to have him.  I knew when I bought a young horse there would be less than perfect rides so I was wasn’t worried in the least.

Holy crap this horse is amazing!  I can honestly say this horse loves to jump.  Like really loves it.  When we are flatting he is getting his eye on every jump and I can just tell he is itching to jump it.  If it were up to him there would be no flat work…ever.   I just need to work on keeping his stride reasonable because they can get BIG.  On baby brain day we did a gymnastics line and the end was suppose to be a one stride but he did it in a bounce… It’s going to take me a lot of practice to get use to his stride because he doesn’t feel fast so I never think I need a half halt but in reality his stride is just eating up the ground.   I defiantly feel like I made the right choice in Czech.  I had a feeling about him when he bailed me out of a really bad spot, I just knew he was the type of horse I needed to progress. 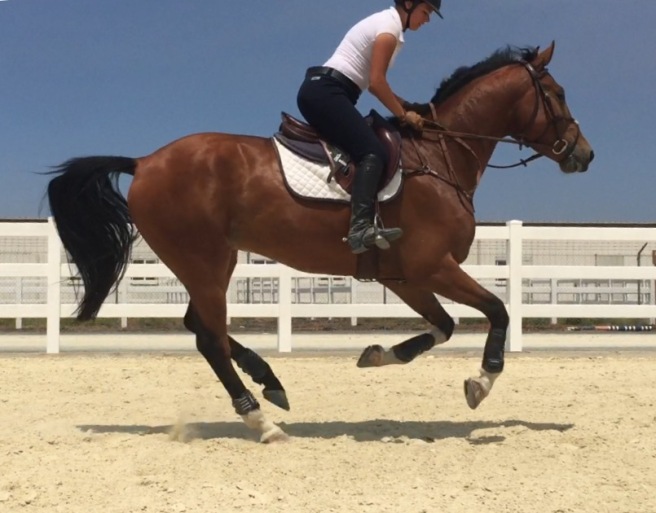 I will do an update on Silver in another post.  He is doing great though and I am super excited to see him show soon!  Here is a sneak peek.

One thought on “Home at last”

There was an error retrieving images from Instagram. An attempt will be remade in a few minutes.